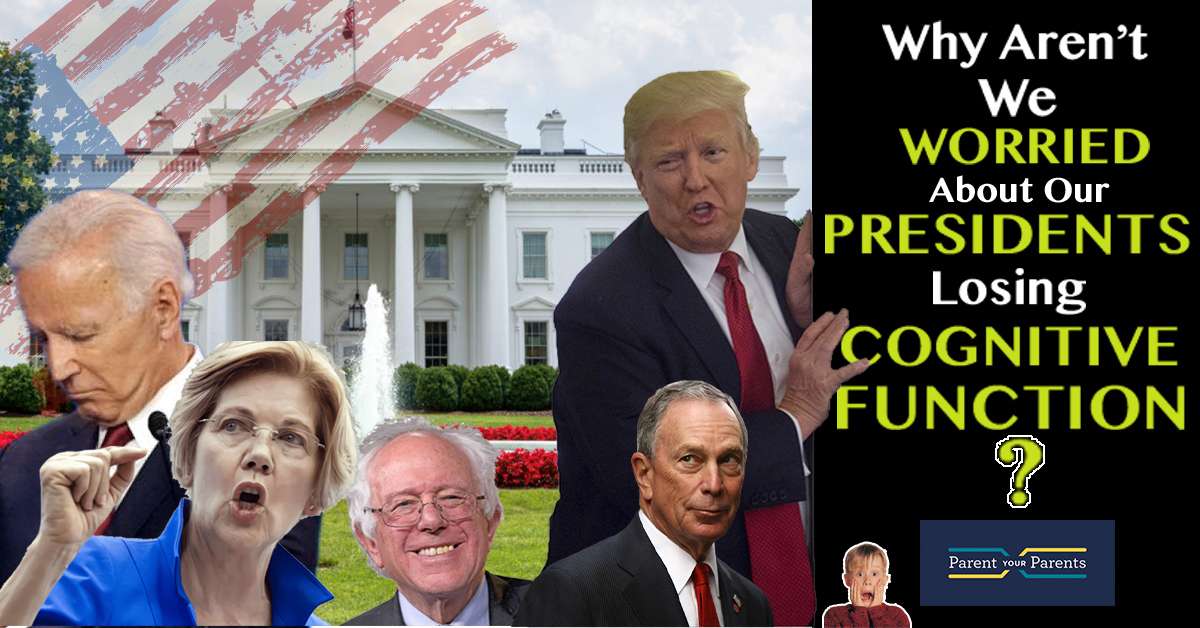 Why Aren’t We Worried About Our Presidents Losing Cognitive Function?

In 2020 we will elect a new President.  In 2017, Donald Trump, at the age of 70, was the oldest President to be inaugurated.  Let’s look at this years front runners:

Donald Trump will be 74 on his second inauguration day.

Elizabeth Warren is 70 and will be 71 on inauguration day.

Joe Biden is 77 and will be 78 on inauguration day

Michael Bloomberg is 77 and will be 78 on inauguration day

Bernie Sanders is 78 years old and will be 79 on inauguration day.

With the exception of Elizabeth Warren, none are baby boomers.

The average age among all Presidents to date is 55 years and 3 months.  Why are we suddenly looking beyond the Baby Boomer generation for our next leader?  The last “greatest generation” President we had was George H.W. Bush and President Trump is older than all of the living Presidents elected after H.W. Bush..  (Jimmy Carter preceded George H. W. Bush and is the oldest living ex-President)

We’ve heard rumors about President Reagan’s loss of cognitive function while in the Oval Office so why is NO ONE discussing dementia as an issue in this election?   The average age for dementia is 80 – which means anywhere from 75 to 85 symptoms can appear.  Although the onset of dementia (whatever form it takes) is progressive, it begins with intermittent lapses and progresses over time. Do we want a President who blanks out intermittently?  Do we want a Reagan cover up?  Do we want “advisors” running the country – or a wife as in the case of Woodrow Wilson.

As a champion of seniors I love the fact that many of the front runners for the highest office in the land are seniors!  However, media and the public are not discussing the truth – it’s much more likely that an older President will be  sick – not just dementia but stroke, heart attack, Parkinsons  . . . Why aren’t we?  Is it because we don’t want to apply a broad brush to ALL seniors?  The reality is that the older we are the more susceptible our immune system can be. The last three baby boomer Presidents did not take a sick day.  (Bush had two colonoscopies and during the procedure made Dick Cheney President under Section 2 of the 25th amendment).

The hypocrisy lies in how our culture treats seniors as if they’re perennially disabled simply because they look old or are 80 and over!  Yet, no one asks the questions about these “old folks” running for President.  In fact, Bernie Sanders, the oldest of the Presidential candidates, raised the most money in the last quarter, $34.7 million.  Clearly, no one cares that he’s 78 and has had a heart attack.  In fact, pundits are wondering if they’ve made a mistake discounting him like Republicans did with Trump.

I don’t know where I stand.  I’m delighted that seniors are well represented in the Presidential race but worried that we as a nation we have not spoken publicly about the health risks of a 75 plus President.  Companies have no problem laying off “older employees” in the work place!