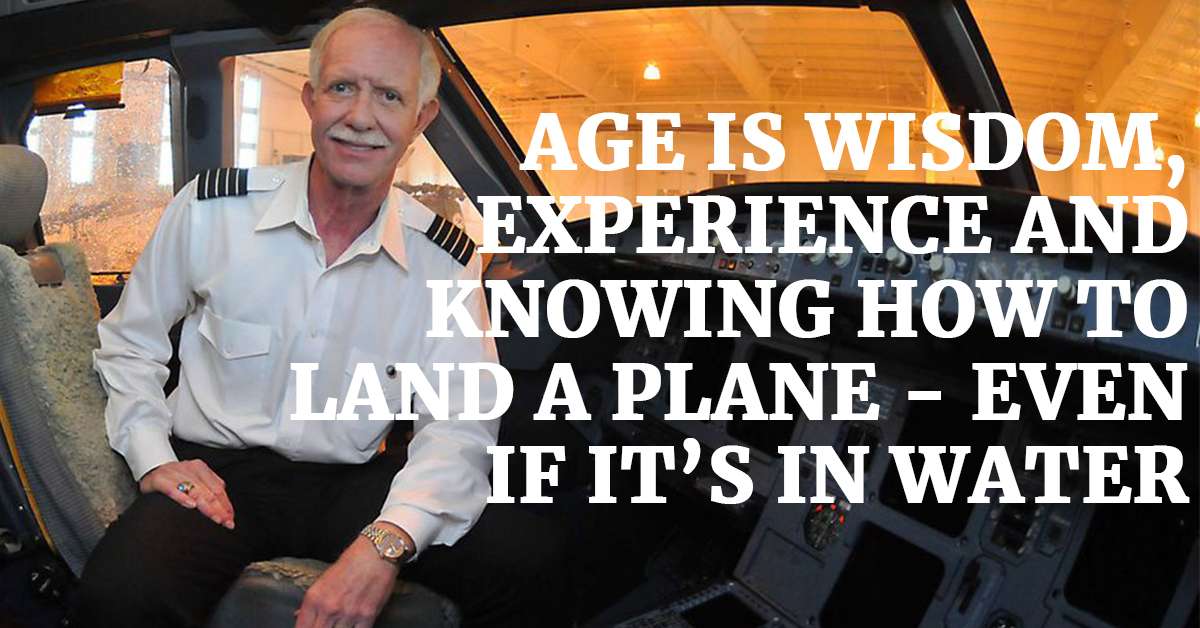 When I was thirty, forty and fifty I had parties celebrating my age!   Then fifty-five arrived… whoops, next I’d be sixty! For the following five years I lied about my age and continue to do so!  Why?   Because the culture of the USA is that Elders really have very little to contribute, and that’s not true.

In the “olden days” retirement began at 65 because that’s when Medicare and Social Security started.  In today’s world it makes no sense to have mandatory retirement ages for any group of workers.  Each person is different in genetic make-up as well as physical conditioning. Retirement must be individualized.  As we hire the young, eager employees we should simultaneously begin to think about testing 60 and over employees for physical and mental strength. This allows for equal treatment of Elders and an objective measuring tool.   Everyone is living longer, and each person lives life differently and should be given the chance to add value to his or her workplace.

Airline pilots is where the data and the experience truly show a discrepancy.  If you work for a Federal Aviation Administration (FAA) regulated airline you must retire at 65 (it was 60 until 2011).  History in the airline industry demonstrates that most of the major crashes are acts of terrorism (9/11), mechanical failure (737 Max) and a few pilot errors in the “under 65” group. When we look at major aviation crashes in which there were survivors the pilots were close to 60 and experienced.

In 1989, Alfred Haynes, the Captain aboard United Airlines #232, piloted a crippled plane to the Sioux City, Iowa Airport after the rear engine suffered catastrophic failure and knocked out the entire hydraulic system.  With assistance from three other pilots, he kept the plane in the air for 44 minutes while guiding it to a crippled landing in Sioux City.  184 survived, 112 died.  Three years later, he was forced to retire ONLY because he was 60!  Does it even make sense to let a person with that type of knowledge and experience leave?

In 2009, Chesley (Sully) Sullenberger, piloted his US Airways flight 1549 onto the Hudson River saving all 155 aboard.  He was also 57.  He retired the following year to become an on-air aviation consultant.  He, too, would have been made to retire at 60 as the age requirement didn’t change until 2011.

Why can the FAA (who approved the 737 Max for Boeing) decide when pilots must retire?  A study from the National institute of Health shows that the difference in pilot errors because of age is statistically insignificant.  In fact, the opposite is true, the more flight hours accrued the less likely the pilot will have an accident.  The best current example is the two fatal accidents with the 737 Max.  The deadly crashes were caused by a system failure.  The airline and its crew were non-US carriers, and the pilots were younger and less experienced.  The same 737 Max system failure happened in the United States, but the pilots were better trained and had experience, ergo the flights landed safely.  Bottom line, the age of the pilot has little nothing to do with his ability to fly a plane.

Be it a pilot, doctor, machinist, lawyer, judge or our President (who at 78 could no longer legally fly a plane) one size does not fit all.  Our Elders have wisdom, experience and advice.  Let’s tap into that.