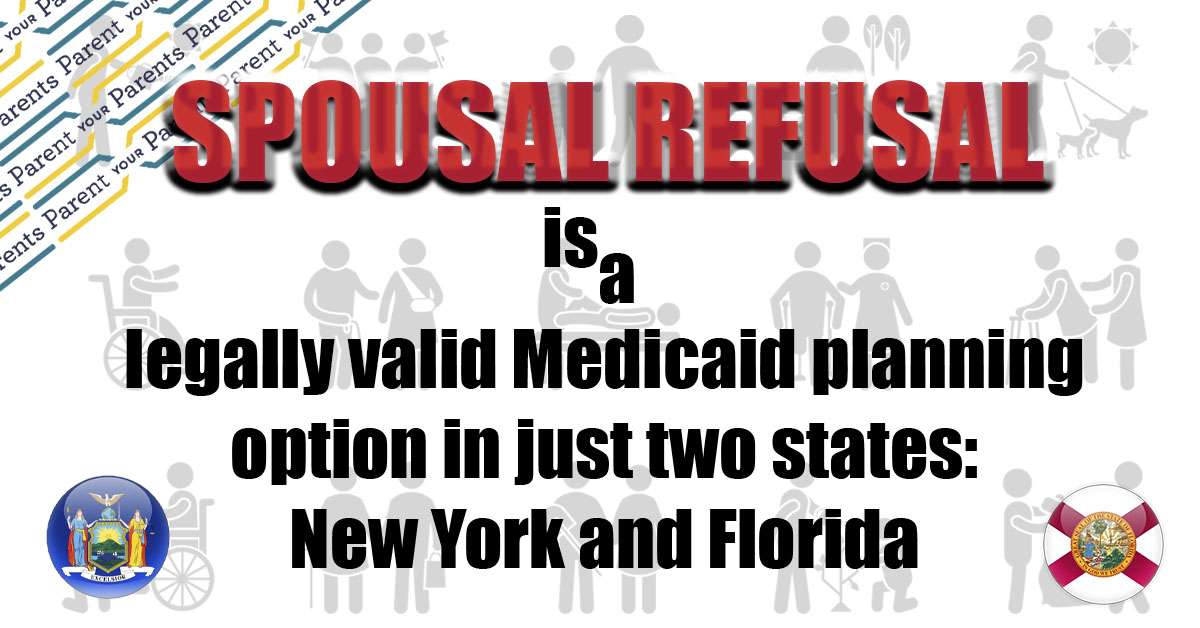 Spousal refusal is a legally valid Medicaid planning option in just two states: New York and Florida. By way of background, certain income and assets are exempt from Medicaid if there is a spouse. Generally, the spouse at home, known as the “community spouse” may keep about $3,000 per month of the couple’s combined income and about $100,000 of the assets or “resources”. Not included in those figures are any other exempt assets, such as a home and one automobile. The spouse who is being cared for in a facility is known as the “institutionalized spouse”.

Many a spouse has advised us that they simply cannot afford to live on the allowances that Medicaid provides. This is where spousal refusal comes in. We start by shifting excess assets into the name of the community spouse. He or she then signs a document which the elder law attorney prepares and files with the Department of Social Services (DSS) indicating that they refuse to contribute their income and assets to the care of the ill spouse since they need those income and assets for their own care and well-being. Note that you may not refuse your spouse’s own income over the $3,000 per month exemption as it is not coming to you.

Once the community spouse invokes their right to refuse, and all of the other myriad of requirements of the Medicaid application are met, the state Medicaid program must pay for the care of the institutionalized spouse.

After Medicaid has been granted, DSS may institute a lawsuit seeking to recover the cost of care from the refusing spouse. Nevertheless, there are a few reasons why spousal refusal make sense, even in light of this risk. First, in many instances, DSS never invokes this right. Secondly, these lawsuits are often settled for significantly less than the cost of care provided. Thirdly, the payment to the county can sometimes be deferred until the community spouse dies. As one county attorney told us when agreeing to such an arrangement, “the county is going to be around for a long time”. Finally, even though the county may seek recovery, it is only for the Medicaid reimbursement rate and not the private pay rate. For example, if the private pay rate is $12,000 per month, which is what you would have to pay, the amount Medicaid has to pay is much less in most cases. So the Medicaid rate at the same facility may be only $8,000 to $9,000 per month. The county may only pursue you for the amount they actually paid. Worst case scenario then, if you had to repay the county, is that you would still be saving $3,000 – $4,000 per month for the cost of your spouse’s care.

Spousal refusal is an excellent option for spouses who find one of them on the nursing home doorstep. Far better however, is to plan ahead with long-term care insurance or, where such insurance is not available for medical or financial reasons, consider setting up a Medicaid Asset Protection Trust (MAPT) at least five years ahead of time to protect your home and life savings.