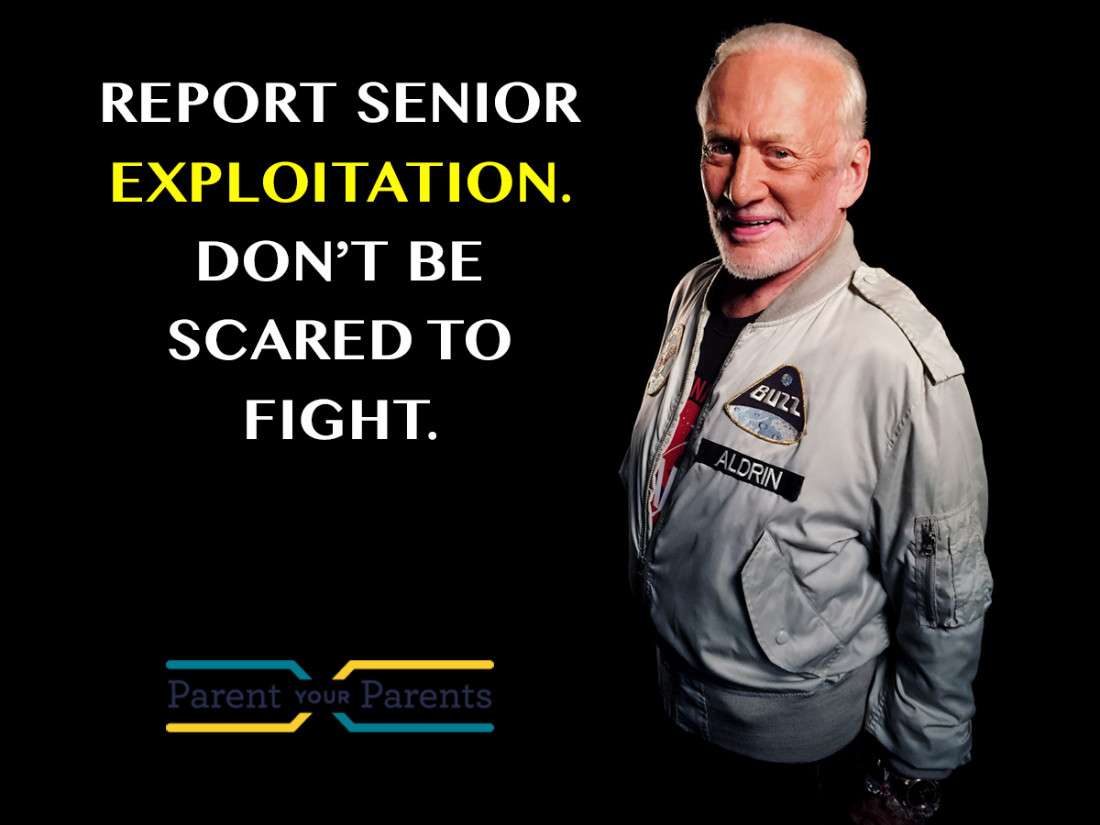 WHO IS THE WORST EXPLOITERS OF SENIORS – FAMILY!  I WORK CONSTANTLY AT TRYING TO GET MONEY BACK FROM SOLAR POWER COMPANIES WHO SELL SENIORS UNWEILDY 20 YEAR CONTRACTS, BUT IN TRUTH IT’S THEIR FAMILIES AND FRIENDS WHO ARE THE WORST OFFENDERS.  STUDIES SHOW THAT 1 IN 10 AMERICAN SENIORS, DEFINED AS 60 AND OVER, ARE VICTIMS OF ABUSE.  FURTHER, 90% OF THOSE ABUSERS ARE FAMILY MEMBERS!

AS ONE OF THREE CHILDREN WHO TOOK CARE OF HER PARENTS THIS STATISTIC SHOCKED ME!  BUT ALL I HAVE TO DO IS READ THE PAPER!  THE INCIDENT THAT SHOCKS ME IS THAT OF BUZZ ALDRIN, THE SECOND MAN TO WALK ON THE MOON.

Buzz Aldrin, the second man to walk on the moon, is 89 years old and has met his fourth wife.  The bad news, the kids don’t like her.

Here’s what we know from media reports; Dr. Aldrin has sued two of his (3) children and his former manager.  Two children, Andy and Jan, had asked a court to name them as guardians citing his loss of cognitive function and dementia. Warrior that he is, Colonel Aldrin (ret) came out fighting!  He sued the kids, claimed they had transferred monies from his foundation for their personal use and used his credit cards without his permission and sabotaged his love life.  He made an appearance on Good Morning America excoriating his children and accused them of exploiting the elderly.

The ousted manager, Christina Korp, states that “almost a year ago, some people began to exert undue influence on Buzz.  These individuals began to actively try to drive a wedge between Buzz, his children and me, for what I fear is their own benefit.”  Her  argument is that because he has dementia he is vulnerable to manipulation.

My argument is that the kids and manager he is suing are doing exactly the same thing.  This ‘fight’ is about who gets to manipulate Colonel Aldrin.  His estate is valued at approximately $12 million. The two children are paid by the Aldrin foundation, as was the former manager.

Lisa LaBonte met Buzz Aldrin because of their shared interest in STEM education (Science, Technology, Electronics, Mathematics).   She works for Carnegie Ventures and because of Colonel Aldrin’s work has become a part of his business life.  They are great friends.

Colonel Aldrin also has a girlfriend (unnamed) and the relationship has blossomed into something more.  One can speculate as to her motive but the same can be said for the kids and former manager.  Further, If Buzz Aldrin is happy  . . . who cares?  Doesn’t  he deserve it?

The latest is his son, Andy, asked Morgan Stanley to not allow Colonel Aldrin to dissolve his REVOCABLE trust.  Morgan Stanley has gone to the courts to ask for a decision.

All of this will be solved fairly soon as the “mental health’ tests have been administered and the Courts will review the three different opinions.  I’m only sad that a man who gave his life to service for our country (his children did not) has to defend his honor.  The children did nothing for the $12 million but now feel as though its theirs to protect.  I say, Buzz Aldrin’s life speaks for itself.  Good for him making a last stand – no matter what the outcome!