In Great Britain, when one of her subjects turns 100, Queen Elizabeth sends them a birthday card.  Next year her husband will join those ranks.  This year there are 13,000 centenarians in the U.K., 8000 in the USA.  Imagine their experiences over this past century.

In 1920 when this year’s centenarians were born Woodrow Wilson was President and George V was King.  Women did not have the right to vote until August of 1920.  There was no television,  outhouses were bathrooms for the majority of US and British Citizens  and the United States had only been an independent country for 139 years.  World War I was barely over and World War II was less than 20 years away.

So, how did Dad live to be 94?  How do others live to be 100 or more?  Genes (I pray!) but only one of  Dad’s brothers lived past 70 and his Father died at 70.  After the war, he moved to Brasil and his entire career was spent looking for oil in third world countries – many of which I lived in!   Gerard Baker, an Editor at Large for the Wall Street Journal, describes his centenarian Father much the same way, an ordinary man doing his job.   Neither his Father or mine spent more than 12 nights in a hospital and prior to the age of 70, no nights all.   That might be lesson number one:  Stay away from doctors and hospitals.

The second common characteristic is living a life of moderation.  Both men smoked for awhile but gave it up.  They drank whiskey every now and again but it wasn’t a central part of their lives.  Never went to a gym (until their 70s) but had routine practical exercise – walked/biked to work, did ‘handyman’ tasks around the house, mowed yards and, remember, everything was much more hands on  . . . even in the early days of TV you had to get up to change the channel! 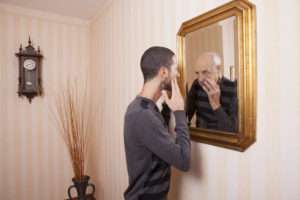 As Mr. Baker reminds us, both were from an era when life was defined primarily by duty, not entitlement; by social responsibilities not personal privileges.  Their sense of obligation was to family, God and country.  Both men were devoted husbands, (62 and 46 years respectively) and dutiful fathers.   Both men had unheralded courage; they volunteered for the armed forces, obeyed the laws of their country, were stoic in the face of tragedy (Mr. Baker’s dad lost a child, my father lost an entire crew in a helicopter crash) and kept food on the table.

Both men (and their wives) have, without fuss or drama, with no expectation of reward or acknowledgement, lived life with the simple joy of living a “virtuous” life.   That perhaps is the most important characteristic they shared!  Next time we visit with our octogenarians, nonagenarians and centenarians reflect on their roots and give thanks they are here to remind you of yours.